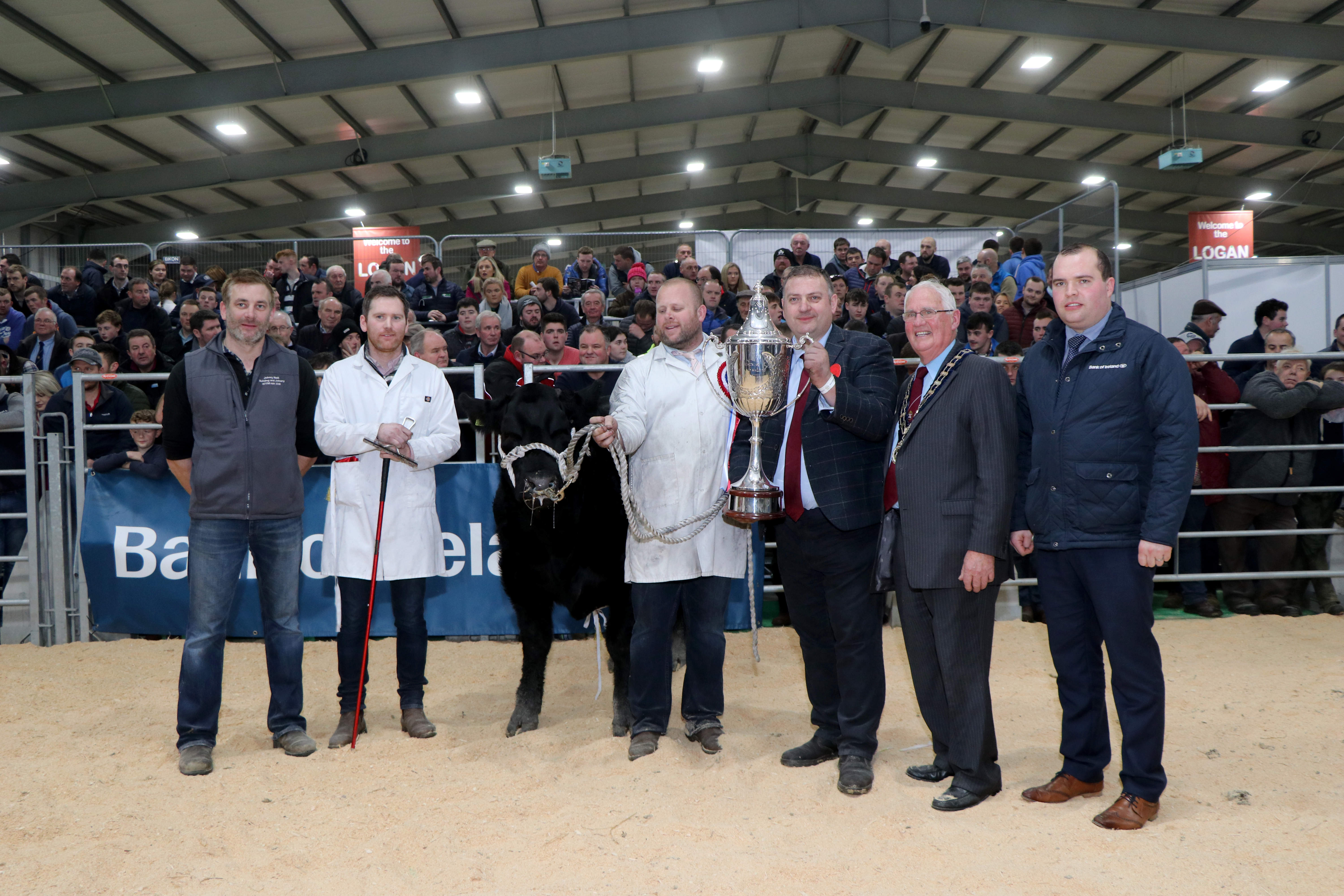 The very best of Northern Ireland’s prime stock competed for hotly contested Championship titles at this week’s Royal Ulster Beef and Lamb Championships staged at Balmoral Park, Lisburn. Organisers, the Royal Ulster Agricultural Society (RUAS) were delighted with an increased entry for the year’s event that was run in conjunction with Bank of Ireland, with plans already in full swing for 2020.

Exhibitors pulled out all the stops and put on quite a show with over 60 classes and championships keeping the packed ringsides entertained throughout the day. Butchers, retailers and showmen stood shoulder to shoulder in the sale rings and bid well for each and every lot, resulting in a swift clearance at tremendous prices from start to finish.

In the prime cattle section it was the County Down based trio “JCB Commercials” who romped home with the Supreme Championship ribbons as tapped out by master judge Blair Dufton, Aberdeenshire. Their winning entry “Flash” was top of the Limousin heifer class earlier in the day, on route to securing the breed championship culminating in the Supreme Champion of the Show. This super May 2018 born entry is sired by Claragh Mufassa, and out of a blue x lim dam. After a flurry of bids the hammer was knocked down by auctioneer Richard Beattie at £5300, forked out by the judge on behalf of Kitson & Son Butchers, North Yorkshire.

Speaking on behalf of the buyers, Anthony Kitson told organisers “We are delighted to have been able to secure the Supreme Champion for our customers in addition to a number of sought after lots in the sale. We plan to mature all of our Christmas purchases at our latest outlet - Five Houses Farm Shop which is situated on the Crathorne Estate where it will be placed in the dry ageing cabinets ready to be used over the festive season and beyond.  Since the opening of Five Houses in September 2017, the Kitsons have focused on showcasing unique and local produce, ensuring the ingredients used by the chefs in the kitchen can be found on sale in the shop. Always looking ahead, the Kitsons now look forward to their next venture having recently acquired The Bay Horse public house which will be renovated and open for dining in 2020.

The same buyers also parted with £2500 to secure the Reserve Supreme Champion brought out by Lisbellaw based farmer Alan Veitch. This son of Ashleigh Admiral is out of a lim x blue cow and was bred by the exhibitor.

One of the highlights of the judging is the Ulster Housewife’s Champion which was judged by David Moore, Country Meats. Leading the way here was young Jack Smyth, Newtownstewart with a fleshy Aberdeen Angus heifer sired by Drumdow Primera N005. Christened “On the money” this quality lot lived up to her name making £4700 in the ring. She was snapped up by regular buyers at this event “The Morning Star”. Corinne McAllister and daughter Peita picked out several lots during the judging for their award winning pub and restaurant situated in Pottingers Entry, Belfast.

Country Meats, Aghagallon will serve up the Reserve Housewife’s Champion for their customers. This was a homebred Simmental heifer brought out by McKenna Bros, Clogher who tipped the scales at 530 kilos and sold for £1800.

Best of Opposite Sex in the Housewife’s Championship was won by the Rodgers Family, Dromora for their homebred steer. Weighing in at 490 kilos this Limousin sired entry sold for £2550 to Lynda Hamilton for further showing.

Entry of calves were of exceptionally high quality with the Champion baby coming from the O’Kane family, Carnlough. The seven month old Charolais Heifer, Tequila, was snapped up for further showing by Tommy Williamson (aged five months) for the 2020 Show Season.

Speaking on behalf of the judges, Scottish Judge, Blair Duffton from Aberdeenshire enthused, “This year’s Royal Ulster Beef & Lamb Championships was a tremendous Show and Sale of quality stock with the Supreme Champion being one of the best animals that I have seen in years. It really was an excellent show and all stock exhibited on the night were of a top standard.”

New for this year was the introduction of show classes confined to members of the Young Farmers Clubs of Ulster. It was from this well supported section that the Supreme Champion pair of lambs hailed from. These were a super pair of Beltex x lambs presented by Zara Preston, Cappagh YFC. There were several clients keen to acquire the Best Butchers lambs with the Mayfly Inn, Kesh making the winning bid of £600 per head. They also secured the reserve champion pen from William McAllister, Kells with his Texel sired pair selling for £250 each.

Speaking about the event, Richard Primrose, Agri Manager for Bank of Ireland UK said, “This year’s event proved to be a great success attracting people from across the farming industry to take part in a variety of showing classes, bid in the auctions, or simply enjoy all that was on offer during the day into the evening.

We’re delighted to play a role in this prestigious event and continue to support all those working in the beef and sheep industries.”

Alan Crowe, RUAS Chief Executive added, ‘‘The RUAS was delighted with the success of the second Royal Ulster Premier Beef & Lamb Championships. This event has grown in stature from last year and we were delighted to welcome both new and existing exhibitors to the Logan Hall. Throughout the day, the atmosphere was fantastic and visitors enjoyed watching the fierce competition in the ring with top class livestock on show. The pinnacle event however was the popular auction later in the evening where top sales were received by exhibitors on the night.

‘‘We were delighted to have the generous backing of our principal sponsor Bank of Ireland. Their support has played a central role in enabling us to deliver this event and the partnership highlights our own and the bank’s support of the local beef and sheep industries.

‘‘We also would like to thank the local cattle and sheep breed clubs and societies, who supported the Championships and kindly contributed towards the prize fund.’’

The buyers of the prime beef and cattle openly welcome customers to their shops, restaurants and businesses during Christmas and the New Year, where their prize-winning stock will be available to purchase.

We would like to express their sincere thanks to all the exhibitors, Bank of Ireland, breed clubs and societies, trade exhibitors, judges, stewards and the tireless team at the RUAS who made this event the success that it was.

A full round up of the day’s events can be found here.

To view the leading prices for Beef Cattle , click here.

To view the leading prices for Lambs, click here